How did the brand Rapha change the face of cycling?

Cycling has seen a dramatic increase in the number of people embracing the bicycle, for recreation, sport or as their primary form of transport.

Cycling has always had ‘tribes.’ Collectives that align to particular values attached to cycling — even if they themselves are unaware of such categorisation and road cycling is perhaps the fiercest ensemble in enforcing these ideals. Its history is rich and it cherishes its heroes with passion. Whilst this created a base of dedicated, die-hard cycling enthusiasts it also built walls for the every-man and cycling became somewhat elitist.

Meanwhile, a revolution was brewing and we started to see the rise of bike enthusiasts such as ‘messengers’ who were the anti-establishment, the rebels, and they were building their own exciting counterculture. Riding track bikes on the street they rejected the uniform of the road and adopted an almost punk style of mixing cycling clothes with streetwear. There was a surge in media spreading out of this vibrant counter culture into the mainstream audiences. Cycling brands started to take note, creating a new market sector of built for purpose urban single-speed bicycles. 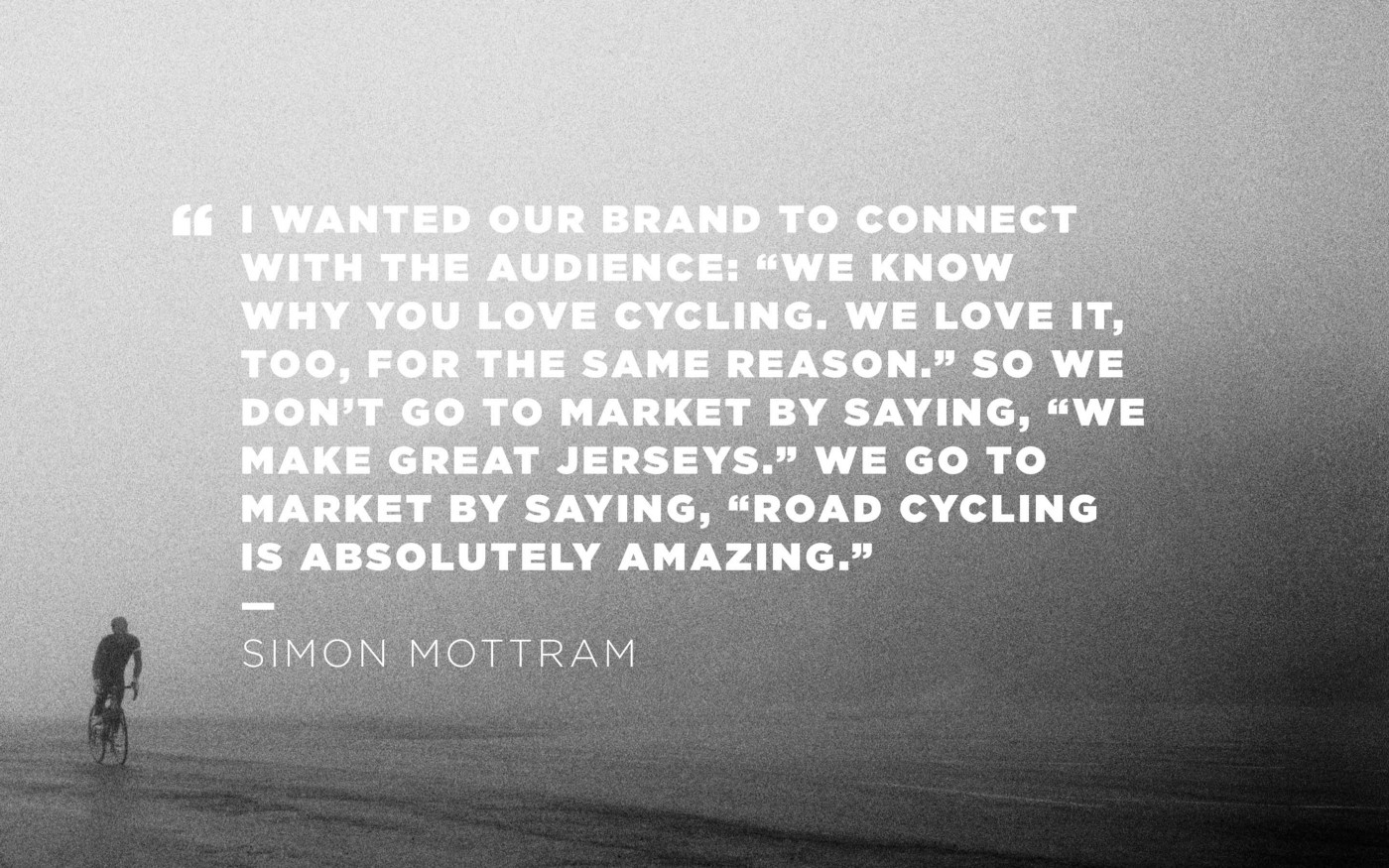 Rapha was founded in 2004, right in the middle of cycling’s ‘re-birth.’ Founded by Simon Mottram, Rapha was born from a frustration with the current offering of clothing products from cycling retailers. Rapha started modestly with only three team members but have quickly expanded over just 12 years to become a multi-national success, with physical stores in 13 locations around the world — but more importantly, Rapha has capitalised on the cycling revolution. It embraced the history of cycling but took it to its next evolutionary step, modelling cycling, and the market in its own image.  Rapha respects their origins but they have also been bold in their execution, it embraced outside influence. In 2005 Rapha founded Rouleur — a magazine widely regarded as the finest racing reportage available and admired by audiences both internal & external to cycling. The publication(s) explore cycling culture but also life outside of cycling. They celebrate the historic culture of cycling but also take in the trends and future.  They released their ‘Fixed Urban Range’ — a collection of tailored pieces with cycling-specific features aimed at the neglected ‘commuter’ market — a market with little relation to the elite of world tour cycling.

The City collection is for the ‘urban cyclist’ for rides to and from the office. In reality, Rapha’s presented a fashion offering. All communications are detail orientated and use the visual language and tones of high fashion.

So what is the key to Rapha’s success? they aren’t selling products, they are selling a way of life. In all of their product sectors, they are building lifestyles — The ’Pro-Team’ collection is for the serious cyclists, bred from working with world tour race teams. The collection’s collateral material focus on the hardships of racing and training, and the technicality of the garments produced for them. Even celebrating the dedication of racing by creating an almost sub-culture within Rapha represented by the Pro-Team range — including its own identifying mark.

Rapha took time to build the culture around the brand.  Simon Mottram was a marketing & branding consultant before founding Rapha. Building a Rapha fanbase meant that Rapha’s customers believed in the products, they believed in Rapha and they believed in cycling. Rapha romanticised cycling into something that transcended a sport and turned it into a ‘cult’. The strength of following allowed Rapha to expand into more than a cycle clothing brand and into a luxury cycle brand. It’s a subtle difference but now, rather than just selling jerseys, Rapha sells a suite of products that also include luxury travel, world tour team sponsorship and its own global cycling club.

This club, the RCC is a £130.00 a year membership. For the entry price members get access (they still have to purchase it) to club kit, a ‘black card’ that gets them a free coffee at clubhouses (their stores) and other benefits. But more than anything it allows the customer to become part of Rapha’s brand of cycling. They wear the RCC logo with pride and pay to do so.

All of this is tied together with the underlying principles of Rapha:

This obsession with cycling bleeds out of everything Rapha does. This level of detail obsession in how a cycling brand is marketed was unprecedented. Considering how expensive bikes can be, the existing communication that surrounded them was poor.

Now, other sports are looking to Rapha and its work in cycling to show how to inspire their audiences to participate and engage in sport. Meanwhile, Rapha continues to grow globally, building a burgeoning fan base of cycling enthusiasts that are dedicated not only to the sport of cycling but also to Rapha as its leading light.

Rapha did its research and found the correct strategy, found its voice and told its story.  We can help your brand achieve this.  Contact us today for an informal chat.

Your Voice.  Your Identity. Your Story ™

Subscribe to get the latest eCommerce and branding tips and news.

You have Successfully Subscribed!

Cookie SettingsAccept All
We use cookies on our website to give you the most relevant experience by remembering your preferences and repeat visits. By clicking “Accept All”, you consent to the use of ALL the cookies. However, you may visit "Cookie Settings" to provide a controlled consent.
Manage consent

This website uses cookies to improve your experience while you navigate through the website. Out of these, the cookies that are categorized as necessary are stored on your browser as they are essential for the working of basic functionalities of the website. We also use third-party cookies that help us analyze and understand how you use this website. These cookies will be stored in your browser only with your consent. You also have the option to opt-out of these cookies. But opting out of some of these cookies may affect your browsing experience.
Necessary Always Enabled
Necessary cookies are absolutely essential for the website to function properly. These cookies ensure basic functionalities and security features of the website, anonymously.
Functional
Functional cookies help to perform certain functionalities like sharing the content of the website on social media platforms, collect feedbacks, and other third-party features.
Performance
Performance cookies are used to understand and analyze the key performance indexes of the website which helps in delivering a better user experience for the visitors.
Analytics
Analytical cookies are used to understand how visitors interact with the website. These cookies help provide information on metrics the number of visitors, bounce rate, traffic source, etc.
Advertisement
Advertisement cookies are used to provide visitors with relevant ads and marketing campaigns. These cookies track visitors across websites and collect information to provide customized ads.
Others
Other uncategorized cookies are those that are being analyzed and have not been classified into a category as yet.
SAVE & ACCEPT

Sign up for our latest eCommerce and branding articles. Take the first step for start-ups or businesses looking to scale online with Shopify.

You have Successfully Subscribed!